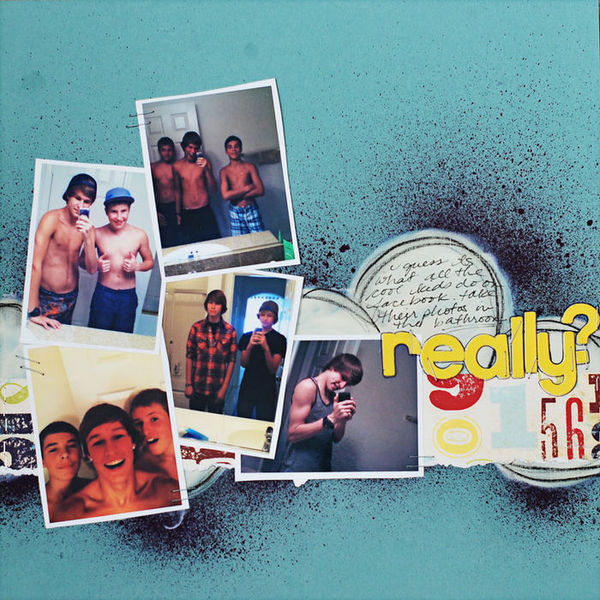 Once your child is a teen, the photos you get, the stories you have to tell, and the permission you might just need to scrapbook those stories all change.

This week on Paperclipping Roundtable, I joined Noell and Izzy Hyman, Ana Cabrera, and Nancy Nally to talk about scrapbooking teens. Take a listen and check out these 7 ideas for scrapbooking teen boys from past teachers at Masterful Scrapbook Design.

1. Scrapbook a “portrait” of your teen boy

Emily Pitts used this photo of her son with his chin up and looking off — as if in to the future — to create a portrait of him at 13, on his way to becoming a man. Emily used a  diagonal striped paper that keeps the eye moving in the same direction her son’s  looking. Her journaling notes the changes he’s going through, with his voice deepening, the peach fuzz on his upper lip, and his attitude about  new responsibilities. 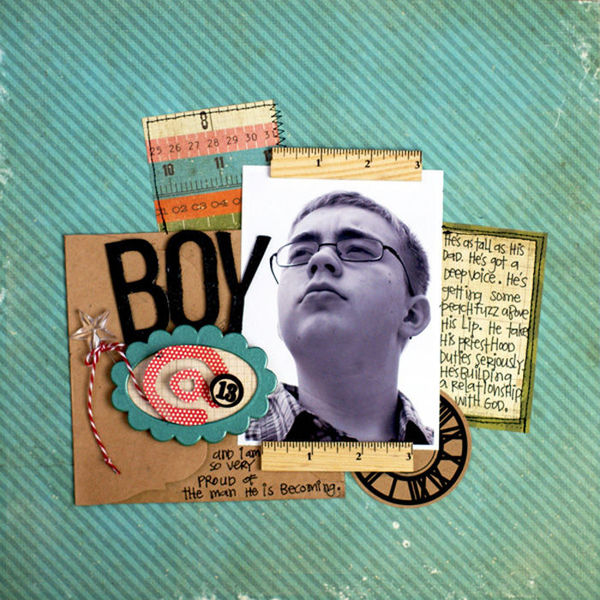 Dina Wakley scrapbooked her oldest son in marching band. Dina says, “My oldest son plays the French Horn in the marching band, and we love marching season! It’s so fun to sit by the band in the stands and cheer on the football team. When I take photos at an event like this, I try to get a couple of close-up shots of my child, and I also try to get several shots of the action. For this layout I chose a photo of my son posing with his marching horn, a photo of him sitting by his friends in the stands, and a photo of him standing and dancing during one of the songs. Those photos helped give a glimpse of the event as a whole. When you take photos at an event, be sure to take close ups and action shots so you get a well-rounded record of what happened.” 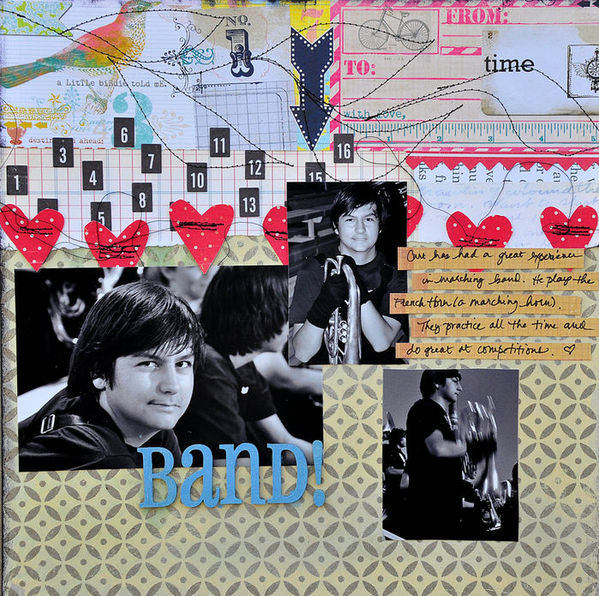 Photographing your teen at a sports event isn’t always easy. You don’t always get a shot you love. Keandra Willis had her football-playing teen run his moves in the backyard before the first scrimmage, and she got these great shots. Patterned paper with numbers styled like the numbers on a jersey, along with stars and a “Ready to Rumble” title all convey the football theme. 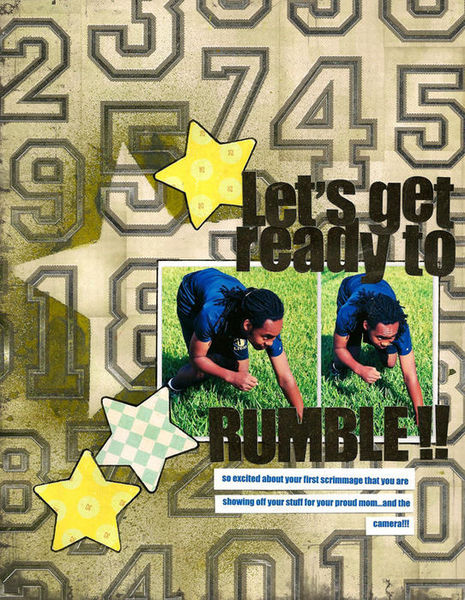 3. Scrapbook his position in the family

Betsy Sammarco’s son spent a long time reading to his cousin over vacation. Betsy says, “To convey the idea of him reading over and over, I used multiple photos. I chose one of the photos to be the primary focal point. Since I chose to keep all the photos in color and the same size, I had to do something different to draw the eye to the one focal point photo. In order to draw the eye to that one photo, I decreased the saturation of the other photos and matted the focal photo. The embellishments above the focal photo form a burst-like shape and frame the photo, drawing the viewer’s eye to it.” 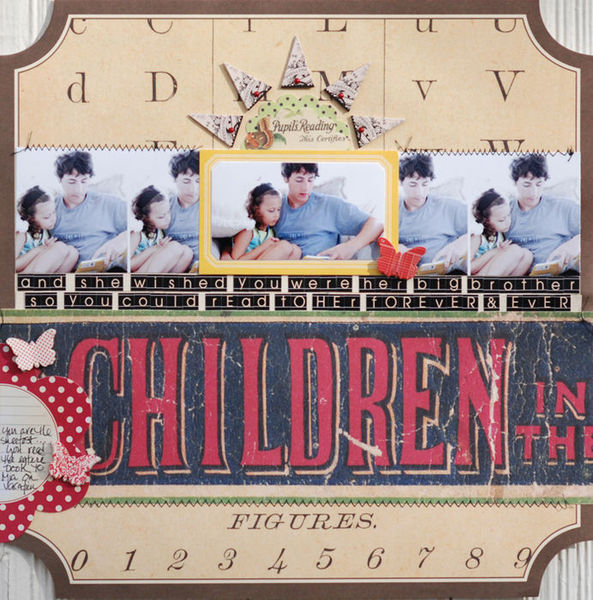 Every time Melanie Grimes’ son is home from school, he must pose with his adoring little sisters. Melanie makes sure to capture this portrait each time. 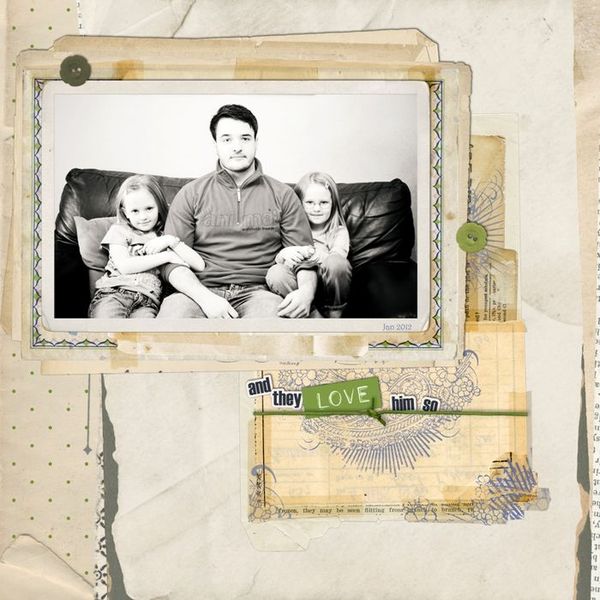 4. Scrapbook something he says

I’d been working nearby as my sons played cards. Finally I told Joshua to push back from the game and do his homework. He fought it, though, and when I got tough, he joked to lighten things up, asking, “Are you saying I’m some . . . Whimsical Procrastinator?” It took him a few seconds to come up with this silly label, and it was especially funny because I’d been poking fun at the names of the playing cards–things like “Mysterious Puppeteer.” He’s always quick to lighten things up with humor and this line is typical of the kinds of things he says.

5. Scrapbook something he’s made

Noell Hyman‘s son Blake wrote a screenplay based on “The Tell-Tale Heart,” and she used the actual screenplay to record the accomplishment. The screenplay is in side the page protector and the embellishment is adhered to the outside.

Tami Taylor says, “Being friends with my sons and nephew on facebook is interesting, to say the least. In my newsfeed I see new photos on a daily basis. There are a lot of photo fads that come and go (think planking).”

None of these fads has stuck as long as the bathroom shot. There are at least four a week. My first thought is always to make sure the shots my son uploads do not show how dirty the bathroom really is. My second thought is that I would have taken a picture if he asked. But I realize it’s a moment to make silly faces, pose without being posed. This is them being themselves: carefree and silly.”

“To document this, I grabbed his photos from facebook. I think he’ll love this when he gets older. He can show his kids. I wonder if they’ll think it’s weird that boys took self portraits in the loo.”

7. Scrapbook him learning something new

When Isaac’s friend Lily had a dance party for her 13th birthday, he wanted to learn to tie a necktie himself, and so dug right in, trying over and over on his own until he finally came to his dad for help. I snapped a series of photos and love how they show Neil teaching him without actually touching the necktie. Chevron prints are great for guy pages.

Link us up to your boy and girl teen pages in the comments.