What’s Your Motif? Ideas for Using Machines in Flight on your Scrapbook Pages

by Amy Kingsford | Feature, Get It Scrapped!

Use rockets, hot air balloons, and airplanes on themed scrapbook pages and to represent growth, energy, playfulness and even ascendance.

Chris Asbury recently took a trip to Las Vegas and stayed in the Paris Hotel. The “Paris” hot air balloon is the hotel’s signature and displayed outside the hotel. Chris says, ” I liked the image so, and I wanted it to appear to be floating in the sky surrounded by clouds.

A little bit about flying machines

Ideas for using flying machines on your scrapbook pages

Ashley Horton paired the airplane motif with other travel-themed elements to tell the story of her children tuckered out after a long day at Disney World.  A strong sense of theme is established right off the bat, providing viewers with visual information before they’ve even begun to read the story behind the page.

Christy Strickler paired a simple white airplane die cut  and playing card embellishments to provide context for her story about the flight simulator game her son enjoys playing at the arcade.  Her placement of these elements also creates a visual triangle of white which guides the eye through the page.

On “Rocket Seat” I combined a hand-painted die-cut in the shape of a rocket with a hand-painted frame for a custom look.  I painted the rocket with white craft paint and outlined it with a black sharpie paint pen.  I accented it with small alpha stickers that read U.S.A.   This makeover helped the embellishment to stand out on the page while giving the viewer visual cues about the story behind it.

Add drama with one plane and loop-da-loop swirls defining a flight path.

On “One Day You Will Fly” I set out to create a dramatic feeling both in the story and design. I used a bold title to draw the viewer in and evoke emotion, and I paired it with a toy airplane embellishment and loop-da-loop brushwork that imply daring pilot moves.  The dramatic vibe is completed with retro-treated photos and  journaling about my son’s favorite place on earth: the Air Force Base Museum.

Kelly Purkey took the popular “burst” design and made it her own on “Lucky.”  She added hand-stitched rays extending from the circular foundation of her page. They define straightforward flight paths for the repeated airplane die cuts which are popped out with foam dots and grouped together by color. 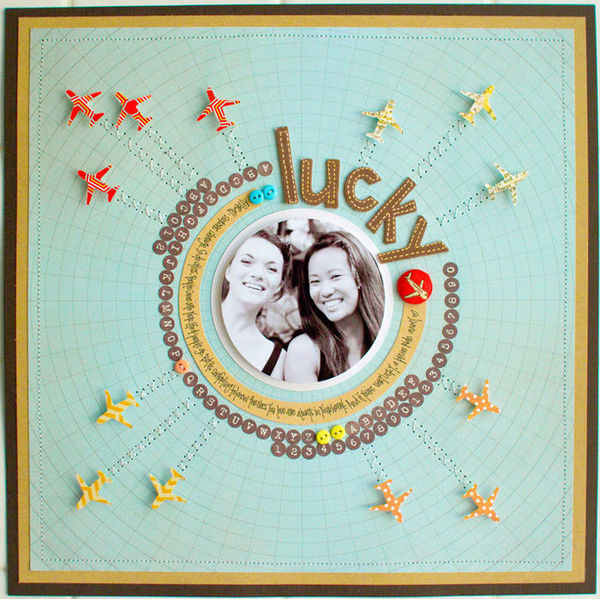 Adryane Driscoll created a simple and whimsical scene on “P.S. Don’t Forget to Write” by combining this photo of her son on his favorite airplane ride with plume brushwork.  This pairing brings a fun sense of movement to the page.

Extend a sky scene in your photo onto the canvas.

On a page about her first time flying in an airplane, Tara Mckernin combined an over-sized photo of an airplane surrounded by sky and a background paper with a small but impactful hot air balloons.  The balloons floating upward at top left, extend the scene in her photo to the canvas.

Up by Tara McKernin | Supplies: Up and Away from Paislee Press;
Font: Traveling typewriter.

On “Rebel Yell” Jennifer Matott used the airplane motif to create both a playful and masculine backdrop for a photo of her son.  She accented her background with splatters of paint and stamped paper airplanes.  She added three folded paper airplanes that add color, pattern and dimension.

Rebel Yell by Jennifer Mattot | Supplies: All papers, stickers, and letters are from the July “Communication” Scrapbooking From The Inside Out kit; Stamp: Lawn Fawn; Ink: Faber-Castell Gelatos mixed with water.

Turn a hot air balloon into a photo frame.

Audrey Tan combined  a pretty background paper, soft brushwork and a variety of detailed embellishments to create a whimsical and dreamy setting in which she can imagine what it would be like to fly through the sky in a hot air balloon.  Audrey kicked the whimsy up a notch by framing a circular photo of her family inside a hot air balloon graphic to complete the fantasy.

Combine airplane embellishments with clouds and stars for unity.

Lynnette Penacho embellished her page about actually flying an airplane with clouds and stars and one pieced airplane. She combined the pieced plane with a large cloud to make a foundation for one of her photos.

Debbie Hodge embellished a page about her high-school son’s homework procrastination with a hot-air balloon. Combined with the title, “Whimsical Procrastinator,” it evokes a carefree attitude.

Katie Scott‘s use of the hot air balloon motif in her page “High Hopes” was small but symbolic.  She used a variety of stickers to reinforce the story behind this fun collection of photos which track both her son’s physical growth over a year as well as the growth of his love for “everything rockets.”  One of these stickers features a hot air balloon along with the words “I’ve got high hopes for you,” which she also used as the starting point for her journaling.

Debbie Hodge scrapbooked photos of close family gathered on the evening of her father’s death, telling stories about him, remembering him affectionately. She embellished with hot-air balloons and a bird, both of which connect the ground to the heavens. The hot-air balloon is the highest element on the canvas and represents the idea of ascending to the heavens.